Following her degree in Chemistry, Cristina Flors completed her PhD at the Institut Químic de Sarrià in Barcelona in 2004 under the supervision of Prof. Santi Nonell. During that time, she studied the photophysical properties of phenalenone derivatives, with particular emphasis on singlet oxygen photosensitization, using a range of spectroscopic techniques. In 2005 Flors moved to the laboratory of Prof. Johan Hofkens at the Katholieke Universiteit Leuven, Belgium, to learn single-molecule and super-resolution fluorescence microscopy. She investigated the photophysical properties of different molecules such as perylene diimide dendrimers and a range of fluorescent proteins. Her most representative result from that period was the single-molecule characterization of the photoswitching properties of the fluorescent protein Dronpa and its mutants. Importantly, they showed how the thorough understanding of photophysics can help optimize super-resolution imaging (Flors et al, J. Am Chem. Soc. 2007). Having gained expertise in a new technique with great potential, Cristina Flors moved to the University of Edinburgh in 2008 to begin her independent research career, funded by the Engineering and Physical Sciences Research Council and The Royal Society. She started a new research program to develop methodology for super-resolution imaging of DNA based on single-molecule localization (Flors et al, ChemPhysChem 2009; Curr. Op. Chem. Biol. 2011).

In February 2012 Cristina Flors moved to IMDEA Nanociencia with a Ramón y Cajal fellowship as a Senior Group Leader. At IMDEA she continues working on the improvement of super-resolution fluorescence microscopy methods, most recently combining them with atomic force microscopy. In parallel to the super-resolution work, Flors is also interested in the photosensitizing properties of fluorescent proteins and their applications in advanced microscopy and phototherapy.

This project aims at developing a new type of light-responsive proteins capable of generating singlet oxygen, a particular form of reactive oxygen species that plays a crucial role in cell signalling and phototherapeutic applications. The possibility to have precise genetic control of the protein localization and thus the site of singlet oxygen generation is attracting much interest given its strong potential for applications in advanced microscopy, optogenetics and photodynamic therapy. A key aspect of this emerging field that combines photonics and genetics is the development of new and better photosensitizing proteins. The objectives of this research line are to understand singlet oxygen photosensitization by proteins (in particular flavoproteins and GFP-like proteins), engineer new and better mutants, and use them in applications such as photodynamic therapy or electron microscopy. This project is carried out in collaboration with the group of Prof. Santi Nonell at Institut Químic de Sarrià in Barcelona. 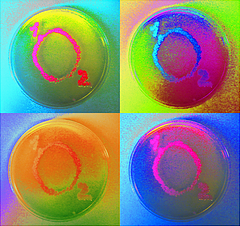